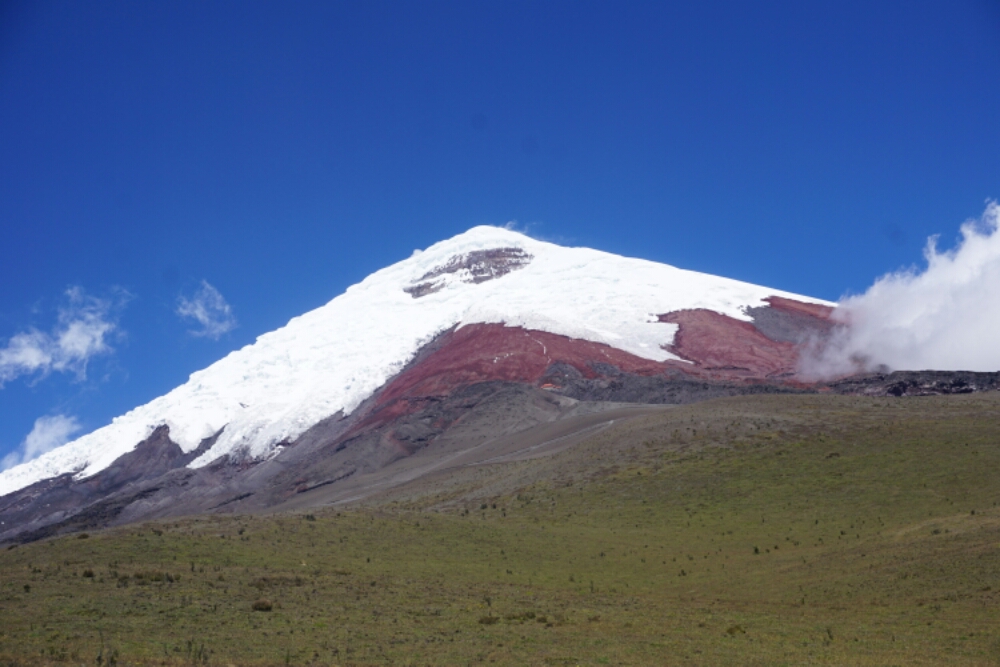 Three days ago we finally booked a tour in Quito, cause you need special equipment and a guide to go up to the summit. We have been told to be guided by an english-speaking well trained guy around 30 years old, but finally just one aspect of the description was true.
Yesterday we left early in the morning to get a bus to Papa Guay, a landhouse, some kilometers to the south of Quito, where we had to wait for some hours until we met our 51 year old guide, who could only speak Spanish and where we got our equipment. „These shoes are a bit to big, do you have smaller one’s?“ – „No, we only have this size.“ Very suprised about this, cause its included in the tour but we took what was available. We met another couple from France and the Netherlands, who were going to do the hike as well and shared the same car up tho the Refuge. They also weren’t that happy with their hiking clothes, especially her shoes were to small, so that the dutch girl had blisters the next day. So it felt, that the garage off the equipment was more a second hand store during its clearance sell.
However, we got a nice meal in the landhouse Papa Guay before we left to the national park Cotopaxi, where we walked a first 20 minutes uphill from the parking lot to the refuge José Rivas, which is situated on an altitude of 4864 meters. It was cloudy and it rained a bit, but we were all looking forward to good weather during our hike which would start at one in the morning. The accommodation was renovated a short time ago, offered heaps of space and had 3 big bedrooms containing three floor bunks. Even flat Oled Lights were used to alight the rooms. 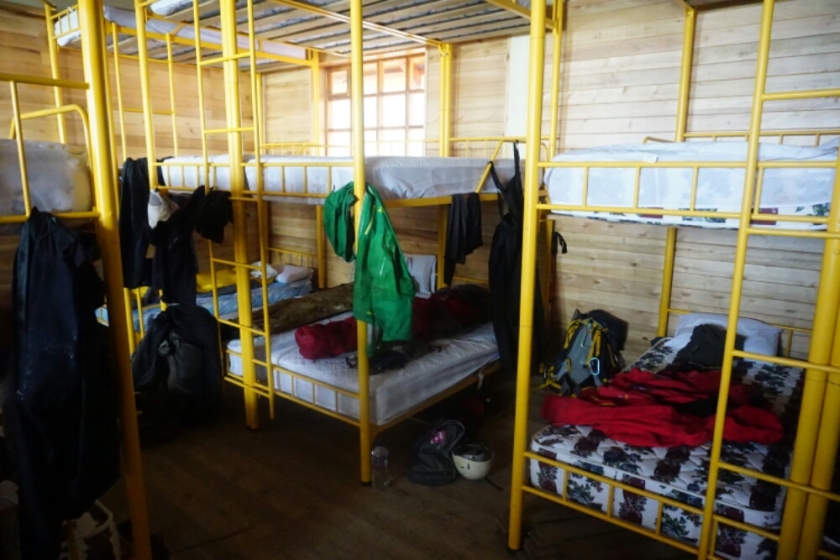 The guide of the other group, who could speak english, gave us four a short introduction about the procedure and the told us the rules in the mountain: every two persons always one guide and build one group, which will stay together during the hike; whatever happens we should only be aware that we are humans and according to this treat each other like this; the weather, the mountain and the condition of the persons determine if it could be necessary to abort the hike.
After dinner, which we had at 6 p.m., we went to bed. Everybody was excited about the upcoming hike and got out of their warm clothes to jump as quick as they could into their sleeping bags. And although I had my doubts I fell asleep very quick. But during the night I woke up cause I had to pee (due to the altitude this happens to me every night since we are in the mountains). Unfortunately the toilet was in the neighbor building and it wasn’t that warm outside, so I went out of my warm sleeping back into the cold night, dressed in my long underwear, big trekking boots, my hard-shell rain jacket and a headlight to relieve my bladder.
At midnight we all went out of bed to enjoy a light breakfast and packed ourselves in at least three layers of clothes. In a good mood, David and me, as well as some othergroups stepped out to crest Cotopaxi. The wind was low, the night clear and ceiling above us was star covered, so perfect condition. After some minutes we reached the glacier and put on our crampons, connected each other with a rope and entered the eternal ice, which also here shrink from year to year. With smalk steps we walked slowly to handle the deoxygenated air. It was very steep inbetween and we had to watch out for little crevasses. In the far distance we could see the lights of the southern part of Quito, down the hill the headlights of the other groups, which were all behind us. After quite a while we made a break to drink some water and eat some chocolate to keep high the sugar level. „5100 meters“, we got answered as we asked for the altitude. We expected to already overcome more. 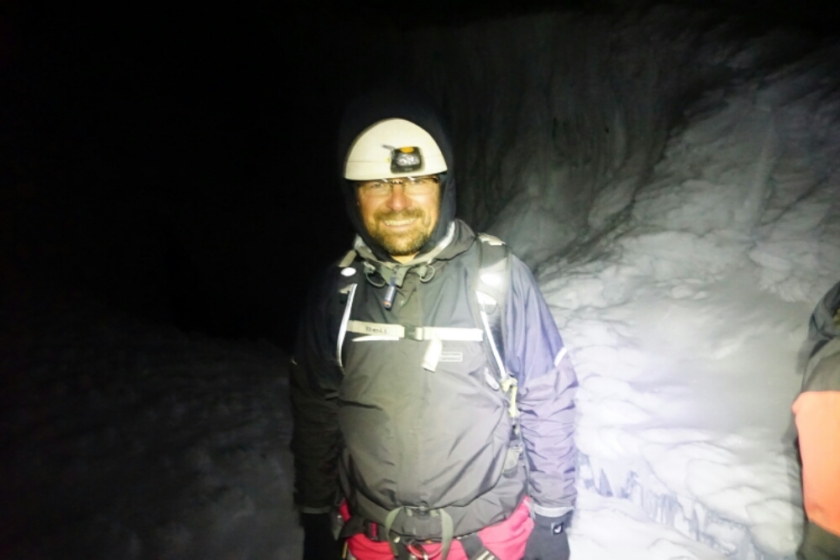 We went on and I still have the picture in my mind: the rope in front of me, sometimes loose on the white ground, sometimes more tense which indicated to me to walk a bit faster. It felt like an eternity, step by step up the hill. The whole town of Quito appeared behind the mountain which had hidden it at the beginning. Only lights, snow and ice which accompanied us. Next stop, only 3:40, we shouldn’t ask again, it’s still a long way up. It became colder and David’s hands were freezing, mine as well were getting colder, but still on a bearable level. Since around 5200 meters a weak headache accompanied to my onesided world of going up. The moon appeared. David shook his hand to warm up, but while doing this he slinged away his glove. Luckily we found it, after we searched the slope with our headlights. Step by step up the hill. I still felt fine, but David showed first signs of exhaustion due to the altitude. Some minutes later he fell down on his knees, but stood up again. The wind increased on one side of the mountain and the communication became difficult. David went down on its knees a second time, dizziness and problems with his stomache bothered him and made it a very hard hiking for him. With his strong will he stood up again. It happened over and over again and as we reached the announced black rock, which indicated the last few meters we had to take the decision to finish our expedition or to abort the hike. David was not feeling fine at all, I guess he felt like inside a delirium. We already reached 5600 meters and It started to become light. all the other groups were behind aus and so we waited some more minutes to see if any person had similar  problems with the altitude. Four groups passed by, some hikers weren’t in a good state as well, but all of them still in a sufficient condition to go on and try to reach the summit.
We turned around and with the first sunrays we could se all the objects and the surroundings, we couldn’t see on our way up. We were encircled by fog and the white landscape, it started to snow a tiny bit. The way down took as well an eternity and I started to get tired as well. We reached the end of the glacier and got rid of the crampons and the rope. Free again we trudged ourselves down to the refuge, where we had a warm tea before we felt asleep. 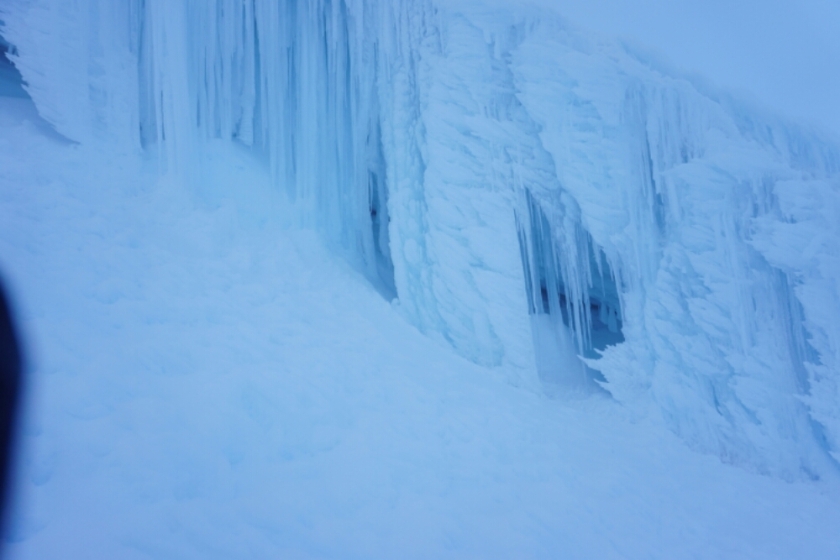 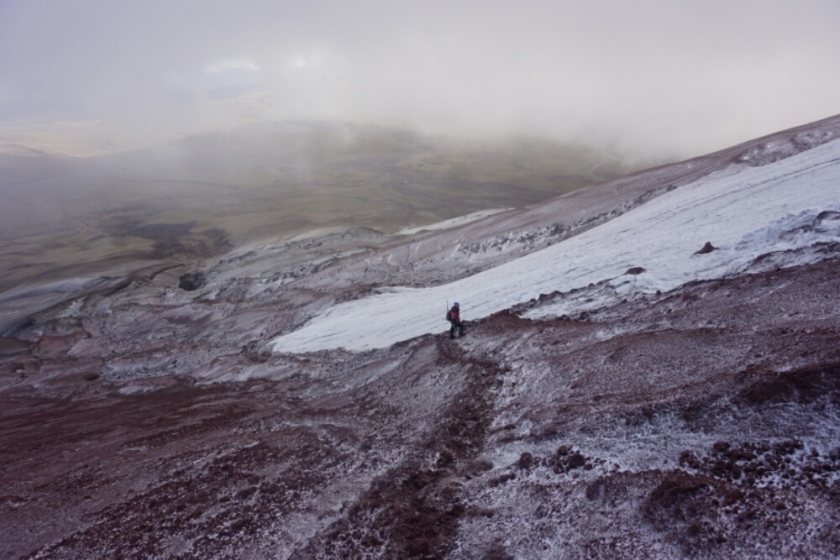 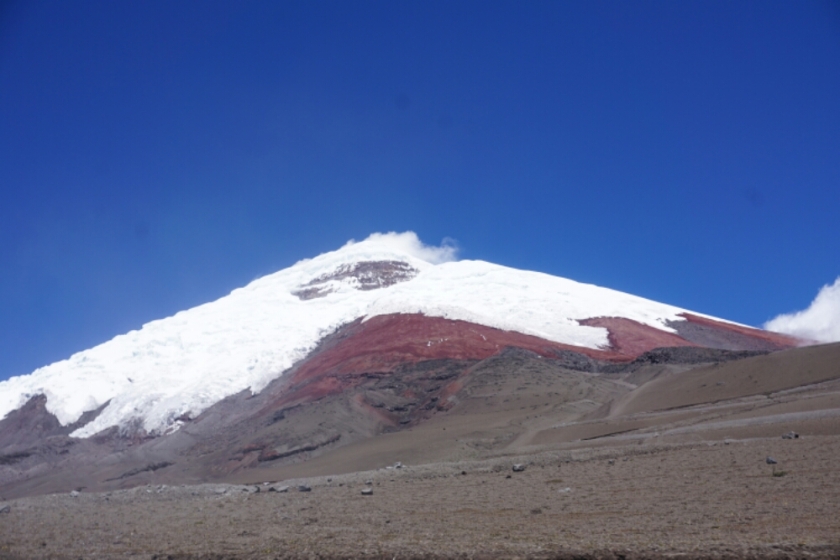 It was a nice experience, my first time on a glacier, my first time on 5600 meters and I totally happy to have done it. I was impressed by the iron will of David, his ambition, which let him stood up several times. The life is more important then any challenging mountain hike. It’s always important to respect the signs of its body and not overdo more then it’s getting too dangerous. And David, believe me, I’m not disappointed to not have reached the top. I learned a lot while hiking Cotopaxi and it was one of my most intensive experiences till I started my travel. And I’m sure that with more time for acclimatization, we would have reached the summit.