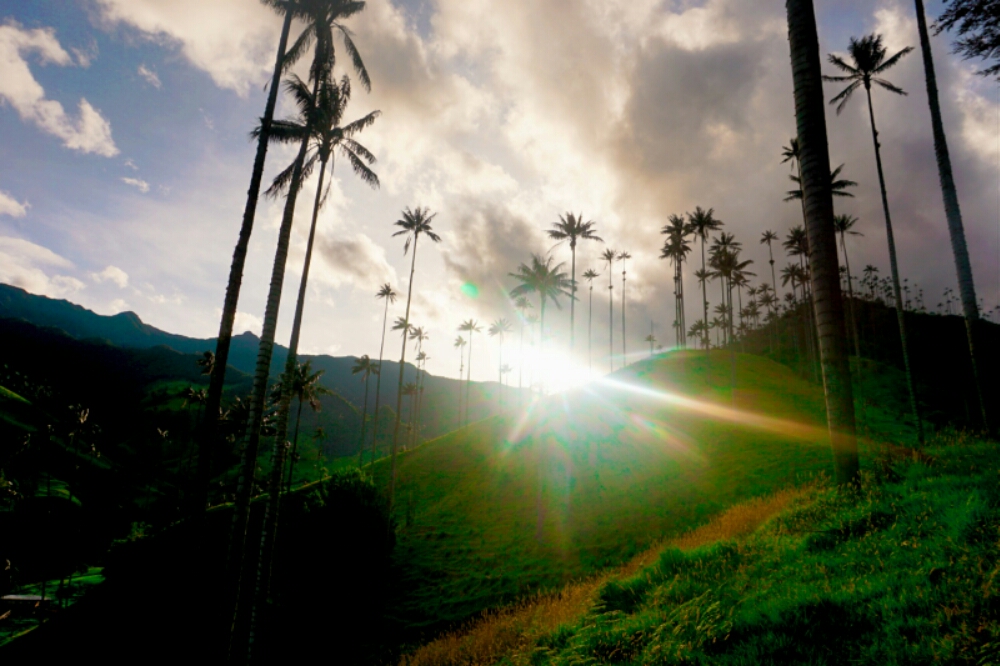 Colombia is turning to my favourite country so far. Nice people, beautiful nature and some more great moments on my way south. Lying in the grass,  surrounded by a bunch of colombian kids, who explore all of our stuff and bombard us with heaps of questions, I’m trying to remember the last days to write this blog entry – and finally the kids are gone, so here we go.
We left the friends of Tobias after the breakfast and went down to Medellín again, where I forgot my Towel in a hostel. After a terrific 1000 m descent we had to climb the whole day and ended up in a restaurant on the top, where we met two Australian cyclists, Joanne and David, who is originally from Germany, but moved to Melbourne several years ago. After we talked for a while we decided to camp behind the restaurant on a horse meadow. 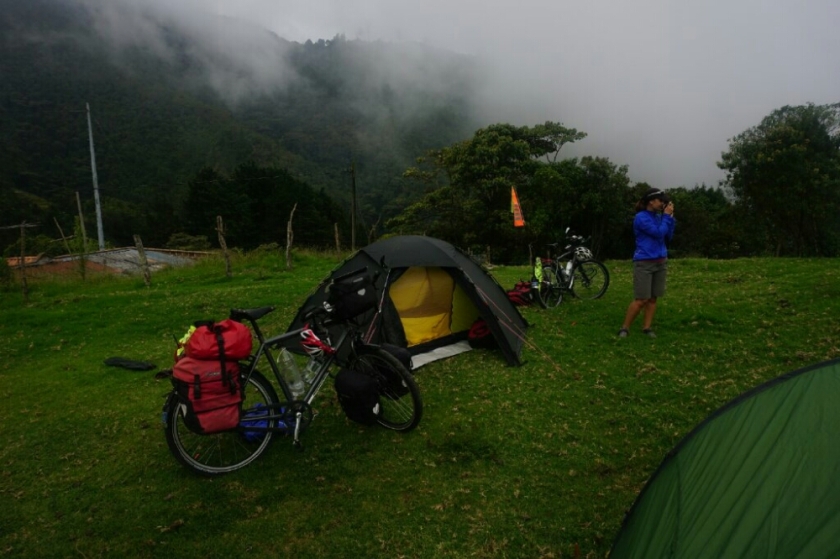 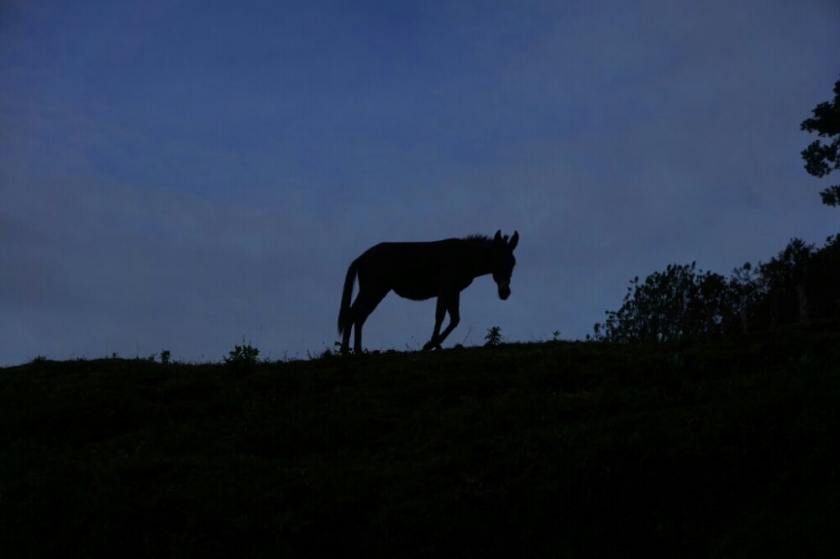 The next few days we shared with the two other „viajeros en bici“, which we will meet again in Equador, where I will join David to hike on of the highest mountains in South America. After we left the horses alone on their meadow, we descended another 45 kilometers into the valley of the Rio Cauca, which is the second largest river of Colombia. The view from the mountains were amazing and the speed of our heavy loaded bikes reached their maximum.

But it took us over and hour to reach La Pintada, the village in the valley, where we enjoyed our daily „Hugo naturales con leche“ (frischer Saft mit Milch). This juices became one of my favourite drinks and now I consume about 4 a day if it’s available. Orange, Guanábana, Banana, Maracuya, Papaya, Strawberry, Lulo, Lemon, Grape, Mango and some more fruits are served ice-cold and give me the necessary power and refreshment during the days. Well, after we enjoyed our drinks we followed the river and tried to make some kilometers, knowing that the next day will be a hard one, climbing up to Manizales. Joanne and David found a super cheap hotel in Irra while Tobias and me drove out the village to camp next to a small tributary river. After a hot day we laid down into the refreshing stream for a while and enjoyed the last sunbeams with a bottle of colombian beer. 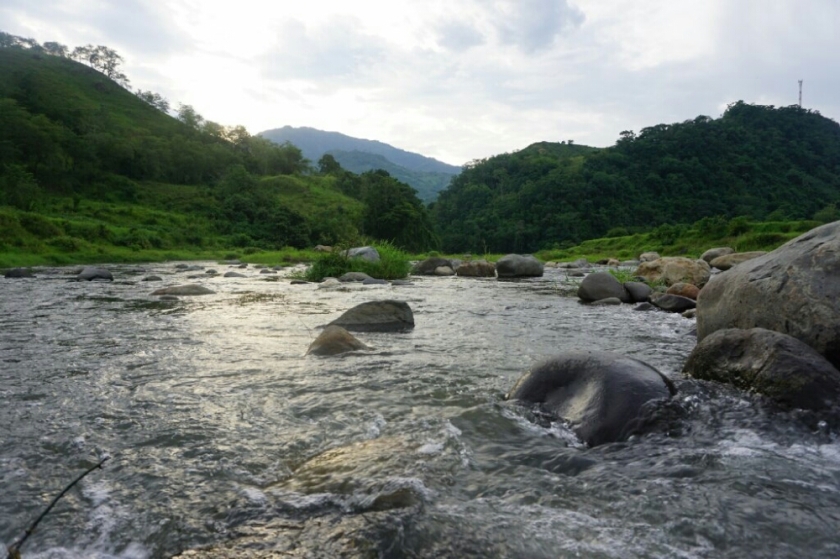 The next day we had to climb 1600 meters and so we started early to have some hours in the cool morning. The mountain seemed to be endless but half the way we were accompanied by a nice girl riding her road bike. Finally we made it and all four cyclists checked in the same hostel to spent three nights in Manizales, which belongs to the famous coffee region of Colombia. An hour by car, two volcanos with an altitude of over 4000 meters stick out in the horizon. I never had been that high, but after been asked of joining a 2000 meter downhill ride by bike I was breathing in the thin air in he next morning. A Austrian guy, David an me went up to 4150 meters by car and got some coca tea, before we were chasing down our mountainbikes. It was an awesome experience in an intense I never felt before on an offroad downhill track. 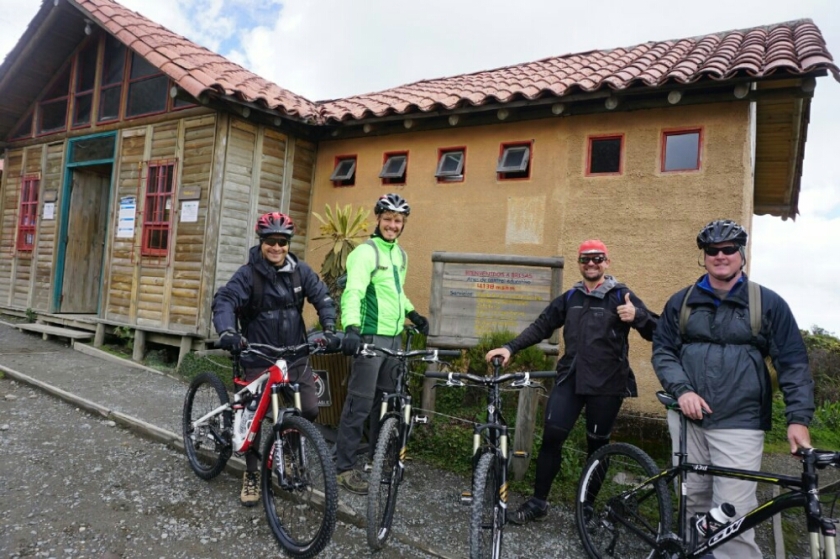 After I had been back on solid ground I relaxed a bit and followed the invitation of the girl on the road bike,  we met before while cycling up the hill. The others stayed at the hostel, so it was only me who where collected at the hostel to attend the dinner at the place of the girl and it’s family. It was another intereting evening with a lot of talking only Spanish and by getting to know a wealthy family.
The next day Joanne, Tobias and I discovered the city with all of its churches and parks.

During the day the colour yellow became the dominant colour in the streets, because Colombia had to play it’s second game in the Copa America against the favourite Brasil. The mood was growing and reached its top in the evening, where a joyful tension was filling the air. The soccer team of the Colombianos made their dream come true and after 14 years of not beating the big rail, they won 1:0 and Alm the town drowned in cheer.
Tobias and I left Manizales in the next morning, while Joanne and David stayed one night more, but the time will come to see each other again. The first few kilometers we flew down the mountain to go to Pereira, where we stayed at a Warmshowers place behind the down in a calm area. The house of the couple was amazing. Full of Fotos and painting, as well as books, records and heaps of well-chosen decoration. A garden with fruits, vegetables, herbs, chicken and coneys gave this beautiful place a complete character. The couple and their son traveled as well down south to Patagonia some months ago and provided us everything a bicycle heart needs to be pleased and feel comfortable. 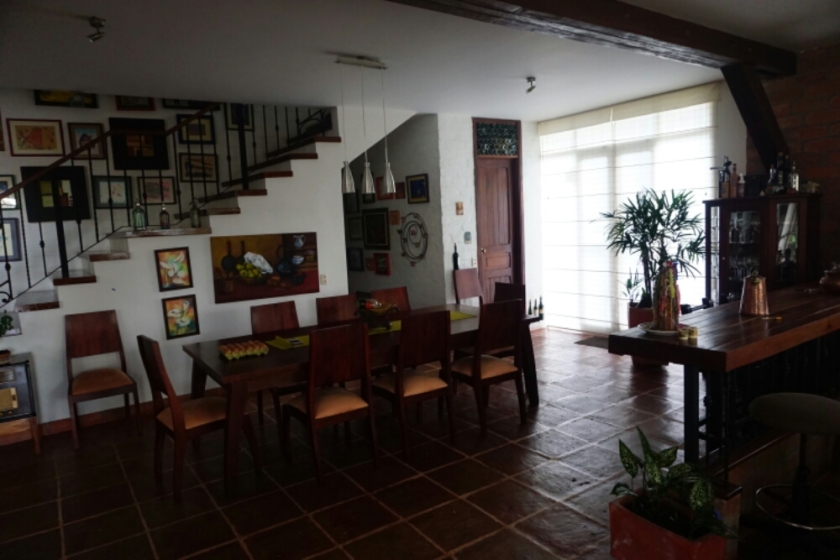 On the descent to Pereira, Tobias fell of his bike, but luckily nothing bad happens. But on the next day he favored his bruise on his upper leg, so that I went to Filandía alone, while he went ahead to our next stay. Filandía is famous for its beautiful and coloured buildings, as well as having some great Coffee Fincas around. So I enjoyed a coffee as well as a Hugo con leche in nice atmosphere in the center, before I went on to the similar but more touristic village Salento.

Arrived there, I couldn’t believe to see a small snack bar with vegetarian and vegan food, burgers, falafel, hummus, guacamole and of course Hugo naturales- wow. It might be nothing special in Germany anymore, but on a continent, where the nearly just only eat carne and where they will tell you in restaurants, not to have any vegetarian meal, in these places it seems to be like a oasis in the desert. Furthermore, some South Americans don’t even know what it means to be Vegetarian – after telling them not to have any kind of mest/carne, they will offer you some pollo/chicken or they will bring you a meal which includes some kind of meat mixed in chickpeas. Salento seems to became adapted to the demands of tourists and the streets were full of international visitors.

Anyway, it’s a nice spot as well and it is close to the Valley of Cocora, which descent up to the mountains with a river in its heart and ends in a small village from where you can do several hikes into the mountains. Huge palms adorn the slopes and create a nice view of the surrounding landscape. We camped next to the creek and fell asleep under the lapping of the stream. 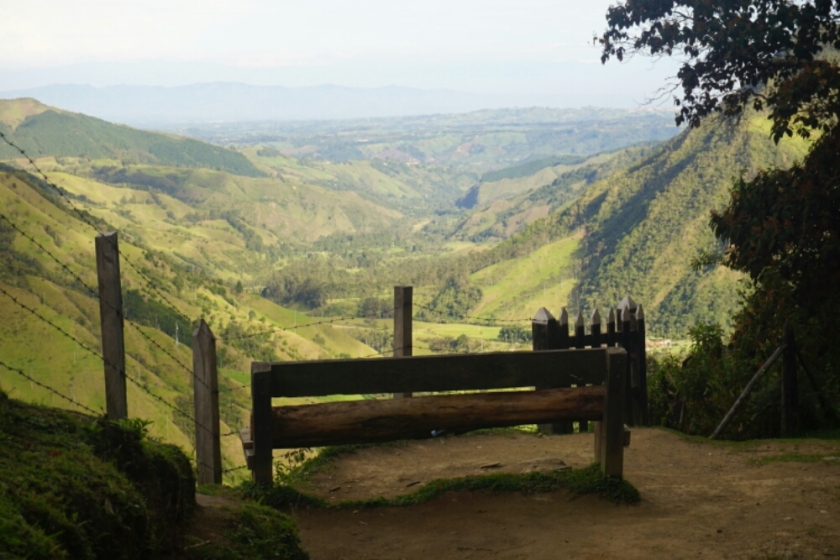 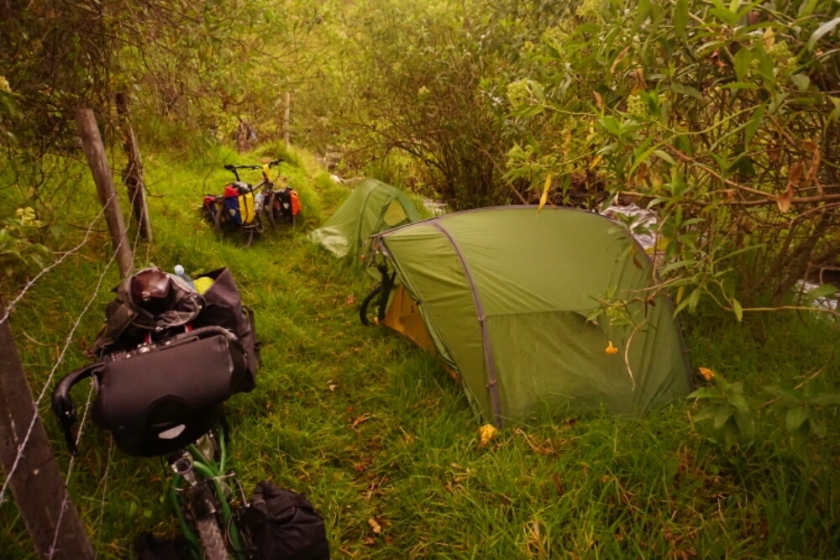 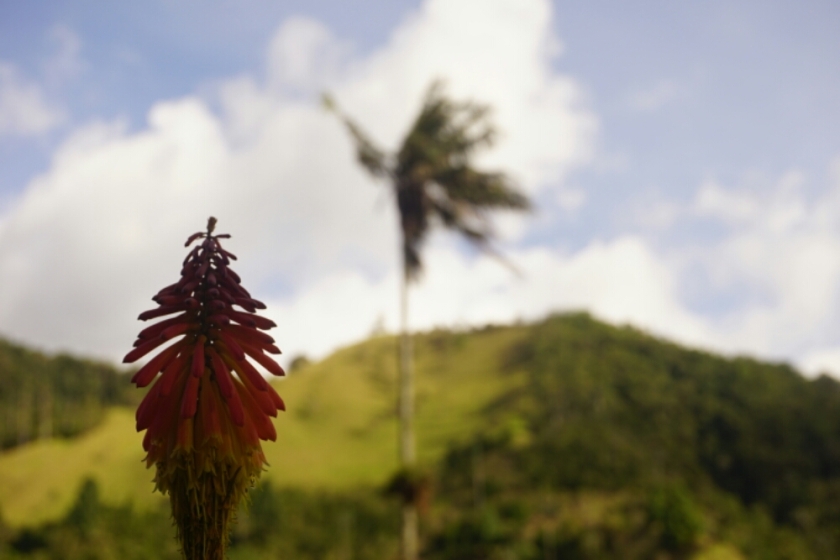 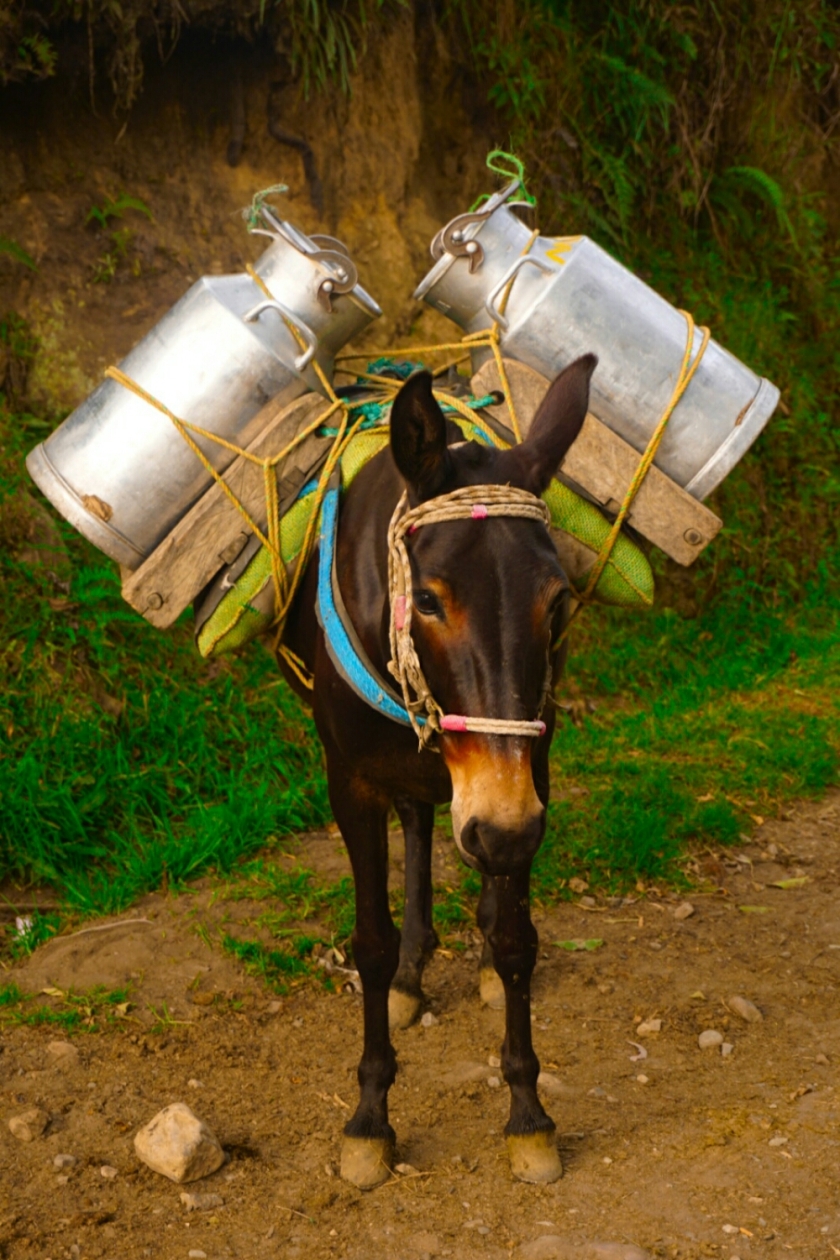 I did a quick hike at 7 in the morning up the hill to gather another view over the valley, before we rode back to Salento. Nearby I attended a coffee tour, where I got to know the whole process of the growing of coffee plants as well as the procedure of gaining high quality coffee, including the picking of coffee cherries and a delicious coffee at the end of the tour. 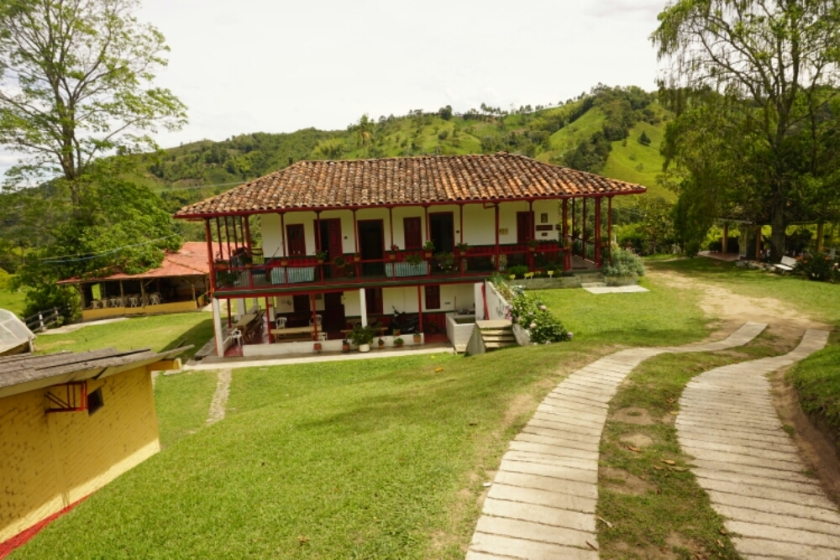 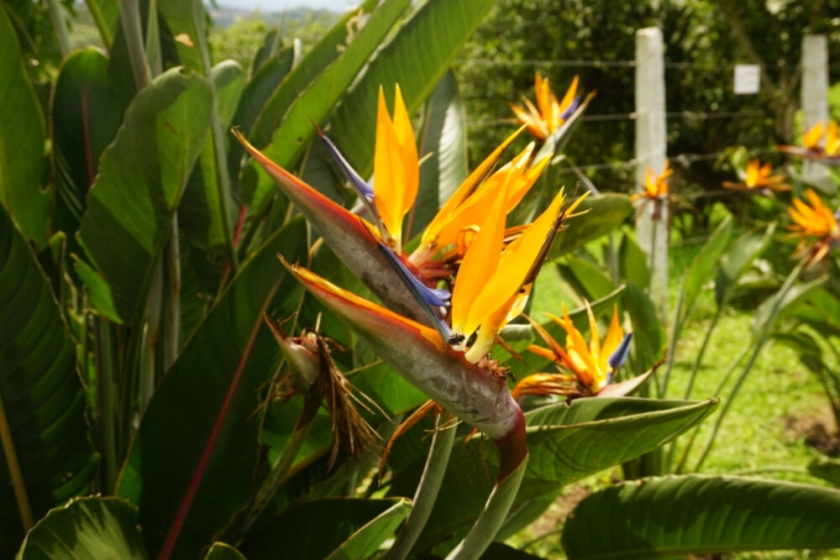 On the way back I was given a lift up the steep hill to Salento to meet Tobias again, who relaxed in the park in the meantime. What happened afterwards is to be considered my hardest climb ever. Another 1100 meters, but this time on a gravel road up to 3200 meters over the sea. On top we found abandoned house with a great view, where we stayed over night. The first time I had to wear my winter equipment and the wind was strong as well. At the horizon we could observe a thunderstorm. 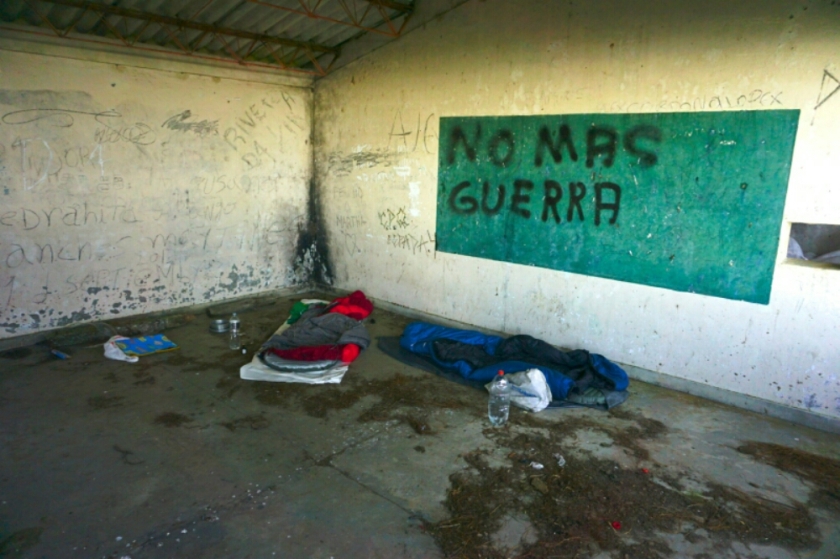 The next day was not much better concerning the up and downs in the road and most of it again on loose ground. On top lonesome cows and horses walked along the path. For the eyes the views were pure joy, but for my knees it became a big challenge. 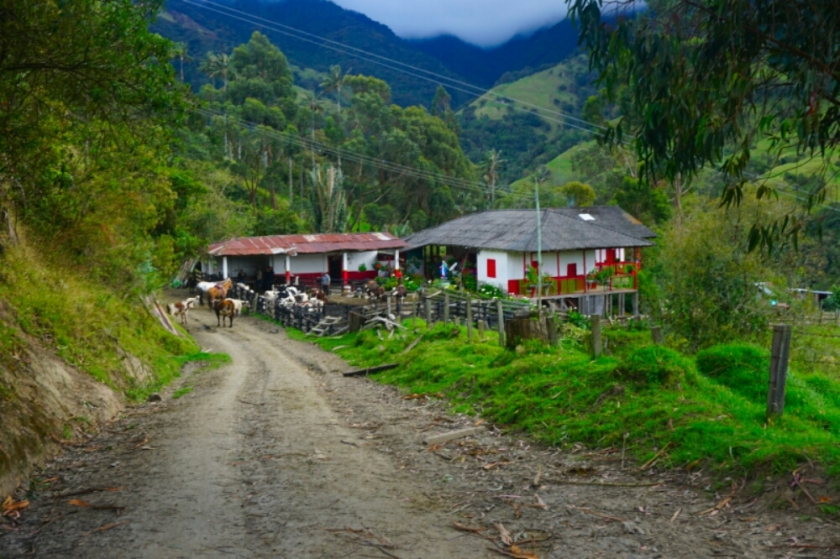 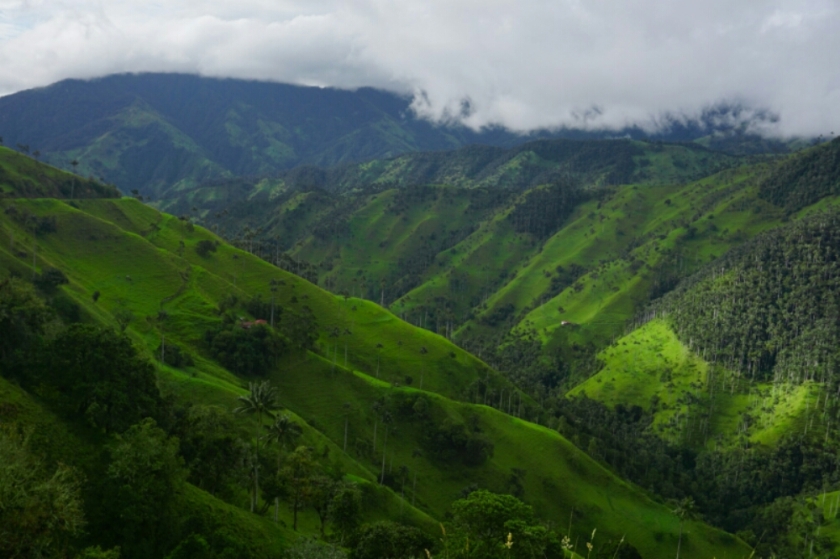 We arrived in Ibagué after two physically demanding days and we’re hosted by another warmshower. This time we made Pfannkuchen instead of Spätzle and went together with the father of our host to a short trip into the city center before I fell into a deep sleep.
Today we went on to La espiral and further south to Neiva, the next big town, which is still 120 km away. We asked for a plce to camp along the road at got offered a meadow behind some houses, which we share with cows and goats. 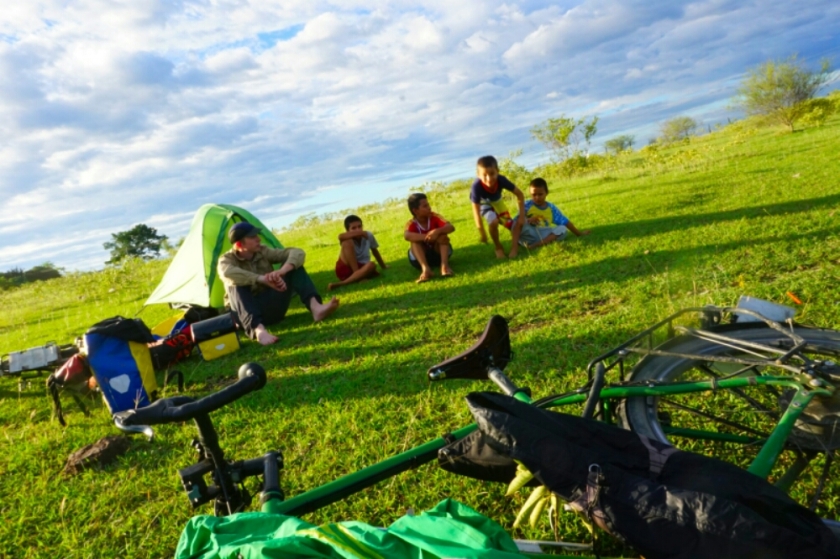 Besieged by four kids, we couldn’t really enjoy a calm afternoon, but the kids seemed to have fun with running around our tents or overwhelming us with questions.
In front of my little home I lie underneath the starry sky about to fall asleep again. To the friends who will attend the Fusion: Enjoy the time, the atmosphere and dance like nobody is watching!