It took quite a long time until I finally have the peace and time to sum up the last two weeks. The story starts on my way to Portobelo, where I arrived at around noon. On my way I met a couple of Canadians (Shift happens), riding their bicycles as well, giving myself some advices for the trip on a boat, what I was in search of to get to Colombia. On my arrival in the hostal Captain Jack’s I bumped into a group, who where just about to visit a sailing boat to Cartagena, Colombia – perfect timing. The tourist guide, who took care of several activities took us to the pretty Calypsa, a sailing boat made of wood with two masts. The captain a Italian with some years of experience, so that I had a good impression and good freling that I will not drown in the Carribean Sea. The departure delayed by one day, so that their was plenty time to discover the small place Portobelo, which was discovered by Christoph Kolumbus in 1502 and whose name means beautiful harbour. A canoe tour to the nearby rivers with the tour guide Franscesco, and a two Swiss was a beautiful experience, especially the calmness and the presence of local birds. We saved a falcon, which was unable to fly and seemed to be very weak. So we took him to the village, where an animal doctor arrived one day later. 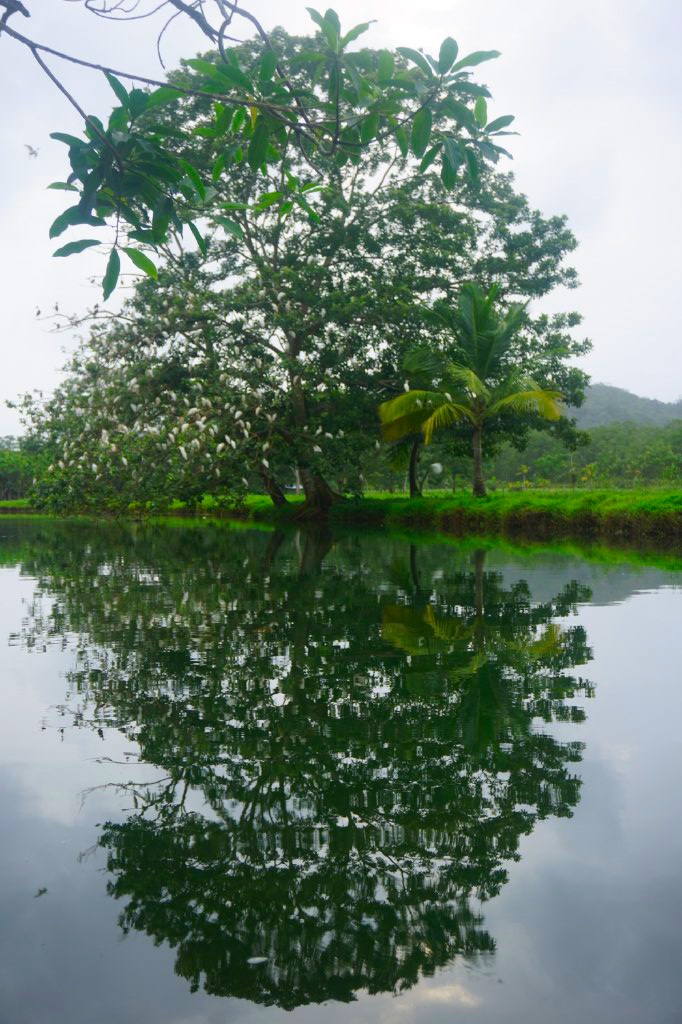 The first few hours on the boat: I never had been on a sailing before, so I didn’t know what to expect. What I definitely not expected was the intense swing. And I was lucky that I choose the bed in the front of the boat, where there the moving was so intense, that had the feeling of falling down after a steep rise. Waves up to 5 meters hugh let me feel to be on a rollercoaster 24/7. Although I didn’t feel that bad, I had to feed the fishes twice. But later on I got used to it.
On our way we passed the San Blas Islands or KunaYala, which are controlled by the Kuna,  indigenous people, who were able to defend their territory against the Spanish invaders and still are an autonomous region as a part of Panama. The islands can be called Paradis because of the beautiful beaches and the clear water. We stayed there for three days and enjoyed swimming, snorkeling and just the beautiful atmosphere. The day we went snorkeling and we were just walking along the beach to find a good spot to discover the sealife, suddenly the crew, who remained on the boat screamed something. Due to tan upcoming thunderstorm, we though they wanted us to come back to the boat. But that wasn’t the message they wanted to transfer to us. They saw a shark and wanted us to stay out of the water. Fortunately we got to sea something big moving close to the beach, so that we finally got the message.
One night, after having a barbecue on the beach, I decided to stay on the island for the night while the others went back to the boat.

I was told to be picked up the next morning, but nobody appeared. I had no water, no breakfast no place to go a lavatory, but I had plenty of time. So, what to do on a lonely island which is as big as a soccer field. Throwing stones in the water, taking pictures,  observe little creatures on the beach, walk around the island, pack my stuff, think about some stuff, throw more stones in the water. After three other guys from the boat came to the island to snorkel I decided to swim back to the boat in my normal clothes. Just 4 hours alone on an island gave me a glimpse on the life of the Kuna. They maybe fish, produce some clothes or wristbands for tourists or pick coconuts but I guess there is not much more. I guess most of them don’t even read books, but still they seems to have a happy life. So what does a human need to be happy? For me it seemed to be pretty boring, but maybe just a thing of habit.
Some more hours we spent on the open sea, nearly 50 hours, surrounded by the sea, 10 people on the boat. I read a lot and could reflect some of my experience I gained over the last days. One thing,
which conquered my mind was the importance of people affecting the time I spent at certain places. People can inspire you and this gained inspiration is the basis of my motivation. Some people really have a big character, they can tell you something what really matters and which I never heard of. Some days later in Cartagena I deepen this thoughts by having several conversation with a guy from Norway.
Time is passing fast sometimes and so now. I will leave the fancy Café Lulo in Santa Marta to meet a group of Argentinos, which invited me yesterday, while I was fixing another flat tyre. But more of this and more about my first days in Colombia with a new run of bad luck in the next entry.
More pictures on Flickr and Facebook.